The 4th international Degrowth-Conference took place from the September 2nd til 6th in Leipzig/Germany. I was there in order to write about it for a paper and had the chance to see some of the very interesting panels and scientific debates.

Degrowth questions the mainstream economic idea of constant growth which is supposed to be necessary in order to sustain wealth, the welfare-state and health and education systems. The idea of degrowth results from an undeniable fact: the way “industrialized countries” from the “global north” are dealing with particularly ecological issues is simply unsustainable and sooner or later we will reach the boundaries of our planet. Be it global warming and climate change or the pollution of the seas and soil, resulting from unsustainable agriculture and industrialization. The Degrowth-movement challenges us to  face this inevitable consequence, that we will  have to completely rethink the way we deal with economy – and together with that how we live within our societies in general. And if this sooner or later will happen, particularly as soon as countries of the “global south” gain momentum in following us in our growth-paradigm, then, that’s the logic, we should start thinking about a transformation already. We should get prepared. And actually see this transformation as a chance to change  the society to our liking rather than waiting until the whole thing just collapses in chaos. So degrowth is not only an economical claim. It asks for a socio-ecological transformation of our society. It asks for rethinking values and poses the question of “the good life”. It asks all the old (and right) questions that have been asked over and over again by a generation after the  other. Each generation, each movement found its own answers to it (and has so far failed to implement them). Is our answer degrowth, then?

Which is somewhat new, I guess, is that “post-growth”, as it is called  in Germany, connects social, economical and ecological issues – coming from an economic starting point. Even though the main claim is economical (our economy, namely the GDP, needs to shrink), it has implications that go far beyond. Criticizing growth touches the core of our capitalist thinking, not only in economic regards of ever growing profits. It’s about the growth-doctrine in our heads (not everyone can make  something beautiful out of that as PJ Harvey). Of having more money, for purchasing more things, for experiencing even more exciting adventures. Having more friends, more likes, more experience abroad. The problems resulting from those ideas are obviously ecological, in a world where it’s clear that natural  resources are limited. But not only that. I liked a presentation by the German sociologist Hartmut Rosa, who stressed that those ideas create subjects of guilt. We feel guilty every second in our life that we are not productive. Because time is money. Or if it is not money, it  is social capital like friendships and networks. And if it’s not social capital  it is cultural capital like knowledge and education. There is always room for improvement. We – as personalities – need to grow. At least from my end I can confirm this analysis.

Degrowth claims that we have to work less for money, which concrete means that we need to do less working hours. Produce less and  to consume less means to share more. Maybe it’s enough if a whole house with ten parties has one driller rather than every party having one on their own. Maybe it’s a good idea to  repair broken things like electric devices rather than immediately replacing it with something new. Maybe it makes sense to swop clothes with friends instead of purchasing new ones when you get bored of the old stuff… The German professor and central figure of the post-growth-movement Niko Paech likes to say that we benefit from getting rid of stuff (that is a nice introduction. You can easily skip the first 10 minutes though…). On the average everyone owns 10.000 items. We own more but there is one resource that limits everything we do: time. And we can only benefit, extract happiness from things if we can actually use them. And it is rather impossible to use all those things that we own on a regular basis. So Paech sais, that consumption has long become a burden. It is annoying and rather feels like an addiction. Getting rid of it to a good extant would be relieving. Of course ultimately I agree with this statement. But I am not too sure if selling it this way will help. In the end it is about restricting ourselves. It is like when you hold yourself back from eating the whole cake because you know it will do you no good and you’re gonna feel like shit.  Sure, the result may be positive. But first you do need to fight against a craving. And this usually doesn’t feel too good.

The idea of degrowth makes very much sense to me. Still the conference showed, how little mainstream that thinking is and how it most  probably will always stay a utopia, as politicians as well as business-people are not very interested in listening to that. Which is a real shame as  it might actually  have the potential to become a real alternative. In Leipzig the interesting and rewarding thing was, that activists, representatives of NGO’s, scientists and artists gathered and exchanges about their ideas and experiences. Many degrowth ideas are already being experimented with on different scales: Urban gardening which I wrote about in my last post; Transition towns all over the world and repair-cafes;

I don’t know if this will ever reach any really effective  levels. It is still worth to think about it and try to realize some of the ideas…who knows, maybe ultimately we will get somewhere with it.

PS: The pictures  took my little sister Caja in Kreuzberg. She is 14 years old and visited me for a week in Berlin. I just edited them. 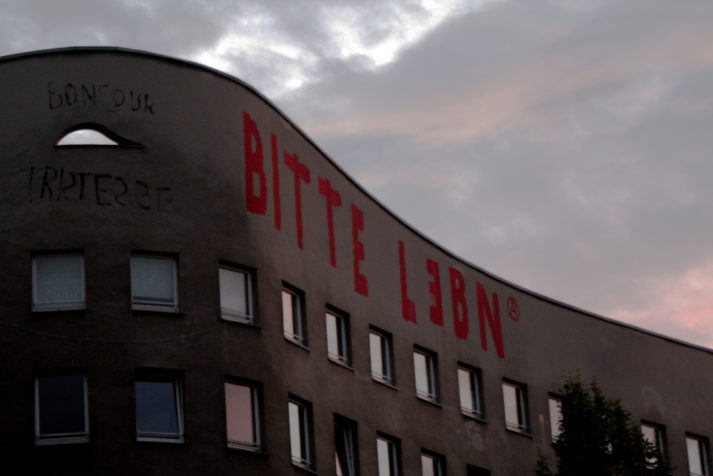 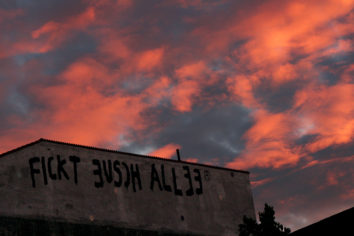 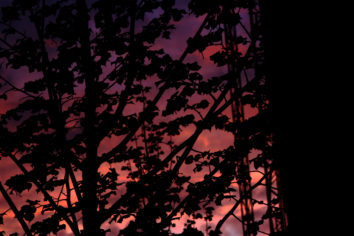 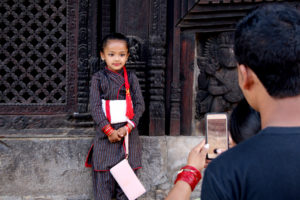 For the living and the dead 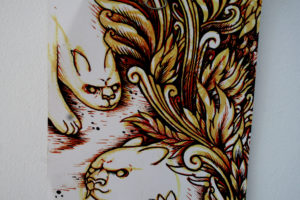 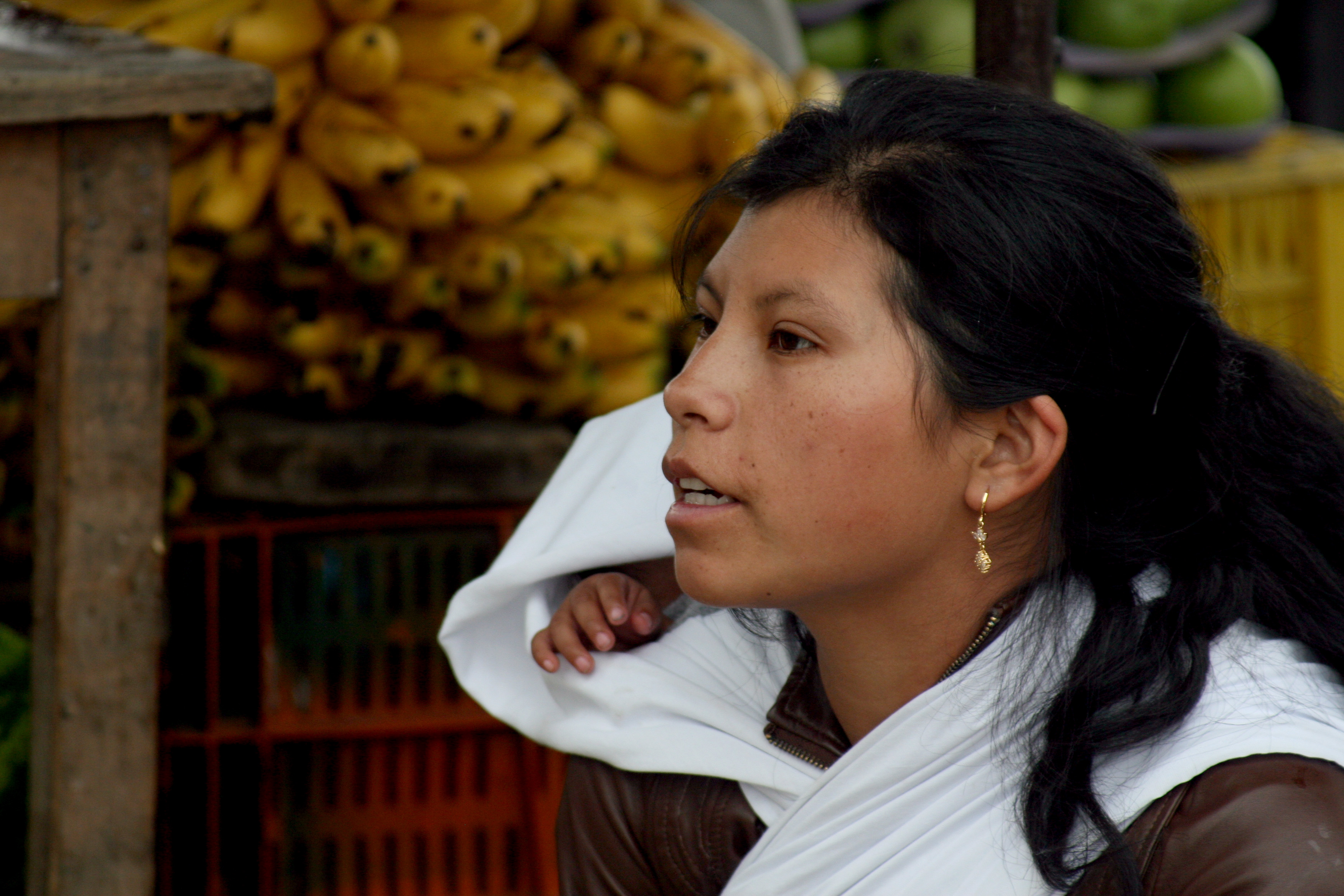